Opening of the George-Knysna railway line, 1928 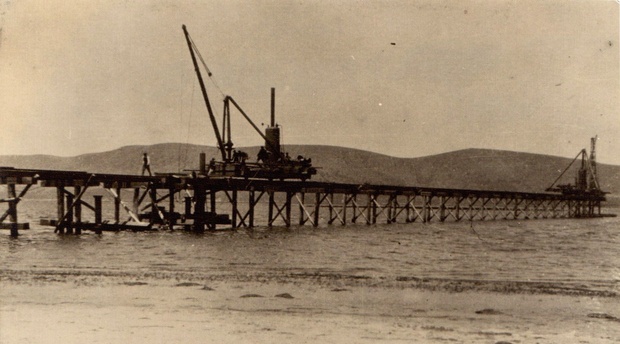 Ceremonial Opening by the Hon. C.W. Malan, Minister of Railways and Harbours

Although the railway from George to Knysna has been available for goods and passenger traffic since May last, it was formally opened by the Minister of Railways and Harbours, the Hon. C.W. Malan, on Wednesday, October 17th.

The scenes of enthusiasm on the occasion exceeded in intensity those witnessed when the first crossing by rail was made, as no doubt the people of the town and district recognised that by giving the line his official blessing, the Minister directly intimated the Government’s continued interest in all that concerns the railway and the progress of the district it now links up with the rest of the Union.

Since he has held the portfolio of Minister of Railways, the Hon. C.W. Malan has officiated at a number of railway openings, and for the most part the lines handed over have been notable for the part they were destined to play in advancing the agricultural development of the Union. In regard to the George Knysna railway, it fell to Mr. Malan’s lot to give an official send off to a section of railway construction that by reason of the extraordinarily impressive and various scenery it traverses is bound to achieve renown not only through South Africa, but in other parts. That it will also play an important part in helping to increase the productivity of the district through which it runs is certain, for already signs are apparent of the manner whereby this steel link with the network of railways covering the sub-continent will impel greater returns in various branches of farming. But before this aspect of traffic will show an appreciable increase, the utility of the line as regards tourists will be amply demonstrated, and the returns from travellers bound for the Wilderness and Knysna, and, as time goes on, one or two smaller places en route, will go far in making the line a well worth-while undertaking.

Travelling from George to Knysna is like being present at an animated art exhibition, each mile presenting a new canvas that calls forth exclamations of pleasure. Never does the passenger reach for his timetable to see when and where is the next halt. One loses, to a certain degree, the sense of time, thanks to a profusion of scenic delights and the excitement of going over comparatively virgin country. In substituting the train for the motor, most people will find that the transference has much in it’s favour. Soon the George Knysna railway will become among holiday-makers the synonym for tantalising travel.

“Forty-two miles of smiles” said one person after making the journey, and in this appropriate simile he has not stepped beyond the bounds of veracity.

Before detailing the function of the official opening of the line it may be as well to give a general survey of the route.

Winding rapidly down to the sea, past fern covered hills and deep gullies studded with wild flowers, the first glimpse of the ocean is obtained at Victoria Bay. Many feet below the metals, the waves, dashing themselves against the rocks, send up a fine spray, the salt tang of which is very pleasant for the hinterlander. Through two tunnels of moderate length cut into the hills above the sea the train approaches the Kaaimans River, the crossing of which at present is made by means of a temporary trestle bridge.

Alongside it, rapidly nearing completion, is the permanent structure, 520 feet long, in a situation which to say the least is remarkable. By December it is calculated that trains will run across it, and the views up the river as the crossing is made will enchant even the most blasé. As the traveller emerges from the last tunnel the scene opens up in all its glory, the view including the golden beaches and enticing woodland of the Wilderness, that deservedly popular resort which will enjoy greater popularity—if such is possible—because of the picturesque approach by rail. The station is prettily set against the background of the forest clad hills, and within easy access of the beach and hotel. From the Wilderness onwards for some miles the rails traverse what may be termed an African Lakeland, so numerous and attractive are the sheets of water that occur with pleasing frequency. Wild ducks in thousands enliven these waters.

Before the climbing of the hills flanking the shores of the lagoon at Knysna, there is presented to the traveller a perfect gem of rural beauty-Goukamma. Beautiful green hills surround little farms whose boundaries lead down to a placid stream meandering leisurely into the folds of the hills. A small bridge painted red shows up vividly among the welter of greenery, the whole blending to charm the spectator. Immediately above the halt the rails make a great horse-shoe bend in the negotiating of the slopes of the hills, the traveller being enabled to obtain another, and more extensive view of the glorious Goukamma before it passes out of sight behind the cuttings.

Soon the lagoon and township of Knysna break into view, forming a picture—from the vantage point above the hills - which countless cameras will perpetuate for many years. The crossover is effected by earthworks, built on the islands, and a long bridge. Crossing the latter at high tide makes one feel that the train has suddenly acquired amphibian characteristics, and is floating over. From either window of the carriage the views are exceedingly fine, the long stretch of river and The Heads vying with each other to hold the attention of the traveller. The train pulls up on the shores of the lagoon, within a few minutes walk from the hotels and business part of this pleasant holiday resort.

Such in brief is the George Knysna railway. It has taken nearly four years to build, and it’s successful accomplishment calls for the highest praise for all concerned. The difficulties that confront railway engineers in all parts of the world were met on this occasion in no uncertain fashion, and besides the work entailed in laying a line along the mountainous coast-line of South Africa, the engineers had to call in divers to assist in putting in the caissons to bridge the rivers. The obstacles imposed by Nature have been conquered by science and skill, the whole construction being another milestone established by the Railway Administration.

The official opening train, with Messrs. Dowson and White in charge, left George early on the morning of October 17th, and before it steamed into Knysna with the Minister of Railways and Harbours and Mr. C.T.M. Wilcocks, member of the Railway Board, on board, fully seven hundred people had availed themselves of the Administration’s invitation to participate in the celebrations.

Promptly at noon the train swung through the flower-bedecked arch on which was written a useful variation of the usual “Welcome,” “Alles van die beste,” greeted the crowd, and a cheer went up as the Minister and Mr. Wilcocks, both accompanied by their wives, stepped out. The gentlemen smilingly received flowers as buttonholes, while the ladies graciously accepted baskets of flowers presented by the women of Knysna and district.

A martial note was lent to the proceedings by the presence of a company of cadets, the buglers of which sounded a welcome while the rest of the troop presented arms. After greeting the officers and inspecting the guard of honour, the Minister, accompanied by representatives of the community, proceeded to the specially erected platform at the end of the station.

Among the group on the dais were the Mayor of Knysna, Commander E.L. Ashley-Foakes, O.B.E., R.N,; Mr. H. van Hyssteen, M.P.C. (both of whom welcomed the Minister); Mr. C. Thesen, a well known citizen of Knysna; Mr. Brink, M.L.A.; Mr. Mileham, Town Clerk of Knysna; Mr. W.G.J. Hill, System Manager, S.A.R&H., Port Elizabeth: Mr. N.K. Prettejohn, the engineer who supervised the building of the line; and Mr. Walker, of the Harbour Advisory Board.

Replying to the speeches of welcome, the Minister, who spoke both in Afrikaans and English, expressed thanks for the kind reception extended, and hoped that everything of the best would attend the people of the George-Knysna district. He then quoted figures and facts relative to the new line, and mentioned that the estimate had been considerably exceeded. He hoped, however, that every effort would be made to make the railway payable. The traffic already handled fell short of what had been promised, and he confidently looked to the industrial and farming community to give the officials plenty of traffic to keep them busy.

Mr. Malan then pointed out in what beautiful surroundings the line was laid, and considered that it would be the means of drawing increasing numbers of tourists to the area. “You are living in a paradise” he said. “Mr. Wilcocks and I travelled in Europe recently, and I tell you that we South Africans have nothing to fear by comparison.”

“We do not know our country well enough,” affirmed the Minister, reiterating the importance of developing tourist traffic. In this regard he appealed to the people of Knysna to establish a live publicity association and maintain a high standard of hotel accommodation. He would do everything possible to help them in bringing Knysna to the forefront. He would also direct the attention of the Director of Publicity in London, then in the Union, to the George Knysna district, so that when he returned to his office he would be in a position to speak with first-hand knowledge of the claims of the resorts along the new line.

In concluding his address, the Minister complimented the engineers and their assistants on their work, and in declaring the line open he wished all in the district every success.

Three hearty cheers for the Minister and Mr. Wilcocks terminated the proceedings at the station, after which the party were the guests of honour at a luncheon given at the Royal Hotel.

After his departure from Knysna, the Hon. C.W. Malan, accompanied by Mrs. Malan, took the opportunity of making a short halt at Deep Waals for the purpose of visiting a huge tree which is being preserved in that neighbourhood as a national monument. This forest giant, which has been named King Edward VII, bears a plate giving the following particulars: “KING EDWARD VII.” Height of bole, 70 feet. Full height, 137 feet. Contents, 1,720 cubic feet. Girth, 21 ½ feet. Large sleepers, 440. Age, approximately 1,500 years. Podocarpus elongata. Common or Outeniqua yellow-wood.